Before it was The Rocking V Cafe, or a pawn shop or an ice cream parlor or some other restaurants or a bank, a post office, a brothel (not really), a car parts store or a place that sold lumber, the building at 97 W. Center St. was Kanab’s original Mercantile. It was built in 1892. The safe dates to 1902 or ’06 or Oh something & the door was made in Hamilton, Ontario (Thank You, Canada!) or maybe it was Ohio. (it WAS Ohio! Still, Thank You, Canada!)

Haunted? You may have to decide for yourself.

The main floor is old and creaky. The front windows still have some of that old glass with the ripples. The original adobe bricks still show through gaps in the stucco and our ghost makes occasional appearances in the wee hours.

It still contains the cubbyholes from it’s post office days, which just happen to be perfectly suited to holding bottles of wine. Safe drinking to you.

Our basement is home to the past’s only ice machine in all of southern Utah. It was a compressor that made ice with ammonia. When it blew up or malfunctioned in one way or another, many people had to be evacuated. There was no 24 hour cable at that time, so folks didn’t know what a “horrible disaster” they were caught up in. There are still lots of little pieces of string dangling from the ceiling in the basement. You can almost smell the jerky drying. The rock foundation adds a pleasant fortress-like quality to the place. Ah, the dankness of it all.

We used to have some very mysterious glass balls…

Upstairs, in what is now The Rafters Gallery, after we tore down the false ceiling & the 78,362,398,277 pounds of cellulose insulation, we found 3 glass spheres attached to the eaves. These spheres were filled with the most toxic, noxious & truly red liquid known to science at the time(so we think). The plan went like this: the building catches fire, the fire spreads up into the rafters, the heat causes the glass to break, the truly red liquid is released and A) the fire is safely extinguished or B) the fire is NOT extinguished, everyone is poisoned and the red liquid seeps out of the building and stains ALL the dirt & rocks in southern Utah, northern Arizona & eastern Nevada.

We’ll never know because the glass balls were removed intact & given away. We were left with a great space for an art gallery. So we built a bar (on which to display ART), put in some track, hung some spots & VOILA! The Rafters Gallery,,,,upstairs…[email protected] The Rocking V Cafe.

This Gallery has nothing to do with the hard working women and men who row for money, except for the painted ammo cans.

Because we do not have our own patio, you’ll see the 2 tables closest to the building, on the sidewalk surrounded by a lovely blue rope. This rope has magical power as well as legal authority. Do not touch the rope our you will turn into a newt. For more insight into the beehive state’s liquor laws, see The Fine Print. 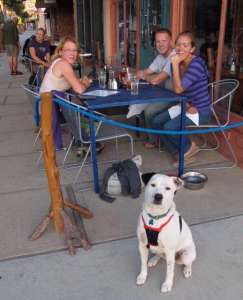 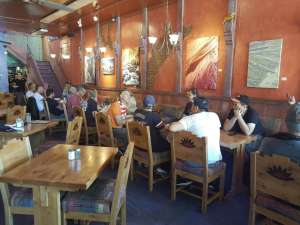 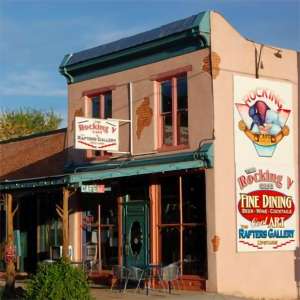 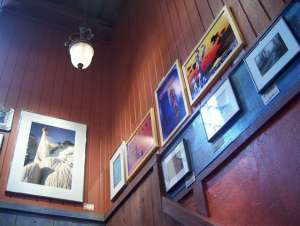 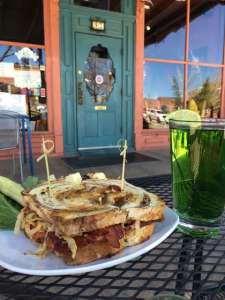